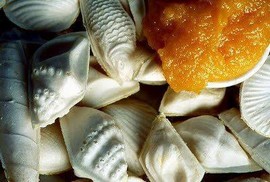 A traditional Aveiro confection made of a delicious “sweet egg-yolk paste” wrapped in a wafer-thin pastry shaped like oysters, clams, cowries and fish, as a tribute to the maritime traditions of the region.

Origin
"Soft Eggs from Aveiro” were first made in several convents of the region. The egg whites  where used to produce starch for the nuns to iron their habits and priest vestments from neighboring monasteries and for clarify wines. So the nuns decided to put the yolks to good use and, mixing them with sugar, started creating what became true icons of the Portuguese cuisine and which recipes ended up surviving the extinction of most of the convents in the 19th century.
The “Soft Eggs from Aveiro” are an outstanding example of this fine art, and come either in pure paste form inside miniatures of the wooden barrels carried by the local fishing and transport boats that ply the "Ria de Aveiro" routes, or enclosed in a wafer-thin pastry shaped like oysters, clams, cowries and fish, as a tribute to the maritime traditions of the region.
A delight to the senses, this regional sweet.
It was the first conventual sweet to be certified within the European Union. The certification seal assures the quality and authenticity of this product.

Boxes of 250g
Conserved at room temperature is a certified product with PGI - Protected Geographical Indication, sent in box packaging.
It's shelf life is about 15 days.

3 Soft eggs myths conservation
1. Soft eggs do not require cold environment
In fact the origin of this sweet had as first priority the use and conservation of the plenty egg yolks existent in convents, hence using sugar in high temperatures cooking was enough to ensure optimal preservation at room temperature, since at that time there was no way of refrigeration.
2. Soft eggs should be stored at room temperature sealed in the box avoiding air and light exposure. Its shelf life is about 15 days.
Indeed conservation in the refrigerator changes the filling ideal conditions. Cold leads to sugar crystallization, which subverts the pleasure of proof which should be creamy without beads.
3. However you can freeze them within the box and take it out 4/6 hours before consumption placing it at room temperature. Herewith who can resist these Aveiro awarded and delicious temptations to freeze.

History
Portuguese "conventual sweets" have strong cultural, economic, historical and religious roots dating back to the 16th century, when sugar was called “Europe’s white gold” and coming into Portugal in abundance from sugar cane plantations in Brazil and in the Madeira island.
This is at the very root of the “sugar culture” practiced in monasteries and convents where nuns and monks would devote a lot of their time to the preparation of egg and sugar based confections.

Pastries from Vouzela (1 Box with 4 units) Convent Sweets
A delicious fresh egg-yolk and wrapped in a thin yet crisp layer of...
€10.70

Egg Sweets from Portalegre 12 Units Convent Sweets
The original recipe of Portalegre Egg Sweets appeared in the Convents of...
€27.70 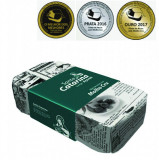