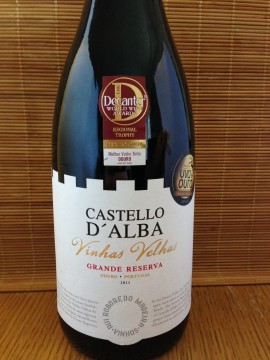 The Wine
The 2011 vintage was one of the best of the last 10 years. By the end of August we had one of the cooler summers of recent years, with a September and early October sunny and warm. These weather conditions gave good maturation to the grapes. In the last 3 months before the harvest it almost didn't rain, giving an high concentration. Excellent reds, very concentrated with ripe tannins of great quality, vivid and deep colors, very aromatic.
18 months in new and used French oak barrels. Grapes from old vines in field blended vineyards, of the following varieties: predominantly Touriga Nacional, Tinta Amarela, Tinta Barroca, Tinta Francisca, Tinta Roriz, Touriga Franca and Souzão growing in schist soils in the Upper Douro. Hand picked grapes, reception with full destemming, followed by crushing and cooling.

Tasting Notes
Very elegant and refined, a modern style that fully preserves the soul of the Douro’s native grape varieties.
Aroma that harmoniously blends the great concentration of Douro reds in all their complexity. Berries, hints of rock rose, spices, exuberant violets and extremely fresh notes of basil and bergamot. The long maturation in barrels produced a wine with great aromatic elegance, where the scents of the Douro are not masked by excessive notes of oak. Very smooth and ripe tannins, fresh and aromatic, very elegant, with an unusual long finish.
Grape varieties: Tinta Amarela, Tinta Barroca, Tinta Francisca, Tinta Roriz, Touriga Franca, Touriga Nacional and Souzão from Old Vineyards.
Alchool: 14%
Origin
Grapes come from vineyards planted in the Douro Superior, at an average altitude of 350 meters, usually with more than 40 years of age, and planted in terraces with predominant exposure East/North.
The vineyards are chosen, one by one depending of the vintage. Looking for a selection of grapes that allows to obtain full bodied wines, very aromatic and rich with great aging ability, gourmet character that represents the "terroir" of the Douro Superior in all its complexity.
This wine is produced at São João da Pesqueira winery, from a selection of grapes from the best vineyards in the Upper Douro. Castello d’Alba was the first wine launched By Rui Roboredo Madeira – in 2000 – a reflection of his experiences and visions of a new Douro, putting together cutting edge winemaking with native grape varieties, where this 7 blend grapes are a good example, creating its own modern and innovative style.
Castello d’Alba emerges from the new wave that has transformed this region forever – at least as we knew it. Today, it is one of the Douro’s leading brands, and features in the best restaurants and hotels.
Awards
Concours Mondial de Bruxelles, 2013: Silver
Decanter World Wine Awards, 2013: Regional Trophy
International Wine Challenge, 2013: Bronze
Uva d’Ouro 2013 – Excellence Award
Pairing
Fantastic with portuguese smoked ham, roasts, game, smoked meats and other typically Mediterranean and  intense dark meat dishes. Excellent with cured goat cheeses.
History
The Côa Valley Archaeological Park is located in the Upper Douro, and has extensive evidence of this region’s ancestral occupation dating back to pre-historic times. It was during occupation by the Roman Empire that the wine culture began to develop in our region.
In 1756, the Marquis of Pombal defined and regulated the Douro Superior wine region, an unprecedented initiative that placed this area at the forefront of modern winemaking regions and denominations, which today still inspires the organization of new wine regions all over the world.
The original landscape was dominated by massive cliffs overhanging the Douro River. In order to grow vines, human labour shaped these into terraces built along the contours of the hillsides, sustained by expanses of schist walls. All of this has led the Douro Superior wine region to be recognised as a World Heritage Site.