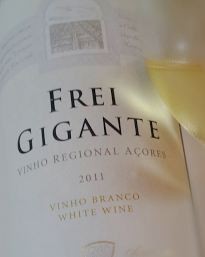 In the region of Biscoitos, varieties Verdelho, Arinto and Terrantez are used to produce fortified wine.
The same noble varieties are planted in Pico which produces the generous Pico island wine, considered one of the very best’s wine in Portugal.
Graciosa produces a combination of fortified wines and light-bodied table wines made mostly from Verdelho, but also from Arinto and Terrantez grapes. The introduction of new grape varietals, such as Fernão Pires and Malvasia Fina along with the latest techniques are modernizing the wine production in this island.
Protected by currais, these vines give rise to award-winning wines and are referenced as VLQPRD Pico - Quality Liqueur Wine Produced in Specified Region Pico, "Lajido" and standout wines like "Terras do Lava" red and Azores white wine, "Frei Gigante".
Frei Gigante wine was named after the alleged introducer of the Verdelho grape variety on the island of Pico.
Tasting Notes
Straw-like coloured wine with light touches of gold. Fruited bouquet, slightly toasted with honey-like touches, tastes like exotic fruits supported by the liveliness of the acidity. Intense assemble with a balanced persistence.
Alcohol 13,5%
Enjoy between 9 to 13° C, with fish dishes and meat, as well as soft cheeses like Azeitão, Serra da Estrela and Beira Baixa Cheese.
Awards
Bronze Medal 2007 International Wine Masters Challenge
Gold Medal 2008 Azores Regional Wine Contest
Frei Gigante, Regional White Wine from Azores 0,75l, year 2011
History
Azores archipelago consists of nine islands and is situated in the North Atlantic 1600 km west of Portugal. Although the Azores Islands are not the ideal place for planting vines, they have been traditionally cultivated in some of the islands since the fifteenth century, namely in Pico, Graciosa and Terceira.
Azores wine wins exceptional ripening conditions in the adversity of the climate, geography and in the harshness of basaltic terrain, along with specific techniques refined and adapted, shows great wine quality and recognized uniqueness.
Building a labyrinthine web of "currais" (black stonewalls made of volcanic rocks where vineyards are planted staying thus protected from the wind and salty sea air) results in an almost surreal landscape classified by UNESCO as a World Heritage in 2004. The “currais” are an ancient technique, to ensure protection of cultures surrounded by miles of water in every direction in the mid-Atlantic, given the effects of the strong sea winds and salty air therefore well mitigated.
Pico, Biscoitos and Graciosa are already qualified as Quality Wines Produced in Specified Regions under the EU wine regulations. Two are fortified and wood-aged: Pico and Biscoitos.
In the 18th century Azorean wine was widely exported to northern Europe and even to Russia, where after the 1917 revolution, bottles of "Pico" Verdelho wine were found stored in a Czar’s cellars.
"Biscoitos" was the wine of caravels trade routes from the oriental world to Europe in the 16th century.The great quality fortified wine of Biscoitos is made of Verdelho grapes apparently brought by Flemish settler.
Currently, fortified wine of Biscoitos and Pico are often used as an "honor drink" in several official events.
Azorean wines traditionally are made mainly from three varietals: Verdelho the same type of grape used on Madeira wine, Arinto a versatile grape variety usually used in  blended wines and Terrantez a white Portuguese grape that makes a sweet fortified wine.
Azores vineayards "currais": 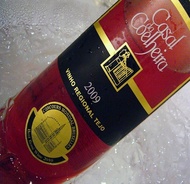