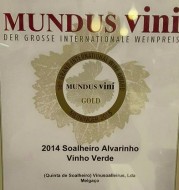 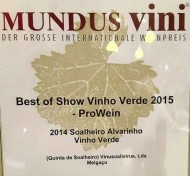 You will certainly love the vibrant and elegant expression of this wine, it’s really something to be passionate for, worthy of the effort in working on Soalheiro vineyards.

Soalheiro is the first Alvarinho brand in the northern point of Portugal, named Melgaço and one of the first Portuguese Alvarinho producers.
Soalheiro arises from the excellent sun exposure of the vineyards bearing the same name - a sunny place.

Alvarinho is better known across the border, in Spanish Galicia, this grape is called Albarino which is the name most foreigner consumers would be familiar with.

Alvarinho produces highly aromatic wines that can be held up against the world's main white varieties is truly one of the best white varieties and actual valued wine competitor given its exquisite
character and unique taste.

Tasting Notes
Soalheiro is a classic wine with a specific profile, aromatic sobriety and great elegance of taste, with a perfect balance between the minerality and the passionate flavor. A mineral and tropical aroma, fresh and intense, anticipating a good ability to evolution in the bottle.
The moderate temperatures during maturation (July and August) favored the aromatic concentration and moderate alcohol levels associated with a well-balanced acidity in the grapes.The harvest time in Alvarinho grapes is strategic, a secret that maintains its freshness and aromatic profile.

Region
A local exposed to the Atlantic Ocean influence and reinforced by the main river valleys orientation, that facilitates the maritime winds penetration.
The Demarcated Region of Vinho Verde DOC, is located in the northwest of Portugal in an area traditionally known as Entre-Douro-e-Minho. Its limits are the Minho River in the North (border with Galicia). The mountainous areas in the East and South, form a natural border between the Atlantic Entre-Douro-e-Minho and the Mediterranean inland.

Alvarinho grapes used in Soalheiro wine are hand harvested and came from several small vineyards planted in granite soil between 100 to 200 meters, located in a very particular microclimate of the sub-region Melgaço DOC.

History
Quinta de soalheiro is located in Melgaço region, is protected by a range of mountains that create the perfect conditions of rainfall, temperature and number of hours of sunshine
needed to the better ripeness of the Alvarinho grapes.
This very special microclimate led to plant the first Alvarinho vine in 1974 and to create, in 1982, the first Alvarinho brand in Melgaço – "Soalheiro", coming from Quinta de Soalheiro.