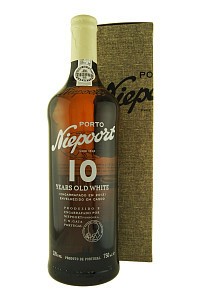 A special and distinct White Port, made for the first time by Niepoort as a result of the exceptional quality of a few parcels of old white ports. Presents a classic style due to the long oxidative ageing process and the extended skin maceration.

The main white grapes of this wine Malvasia Fina, Viosinho e Gouveio undergo a long period of skin maceration and are foot trodden. Following the addition of grape brandy, the White Port spends a year in large oak vats, followed by ageing in traditional oak pipes for a period of between 7 and 15 years. Prior to bottling, a selection of the best White Ports was made and the resulting wines were blended. The result is this 10 Years Old White.

Niepoort is the most consensual producer in a national wine scene. Any wine lover have perhaps enjoyed one or more Niepoort gems that year after year has been producing. With Nieport we can say that wine art is being bottled.

Tasting Notes
This wine is made with Côdega, Rabigato, Viosinho, Arinto, Gouveio and other grape varieties
Golden in colour, exhibits a complex aroma of dried fruits dominated by orange peel and dried figs, as well as walnuts and roasted almonds. A floral touch completes the aroma. On the palate it is very fine and balanced, with a vibrant acidity balancing it´s sweet character, interacting with the fortifying spirit to perfection and giving the wine a superb structure.
Serve chilled as an aperitif, with dessert or even on its own at the end of a meal.
Scored 17/20 e 86/100

History
Dirk was born in March 1964 to a family who owned a small Port shipping business, The Van der Niepoort. After a spell away studying, working in a wine shop and making wine, Dirk returned to the family firm in 1987, and was determined to do something different. With fruit from two newly purchased Quintas-Napoles (in 1987) and Carril (in 1988) he decided to try making table wine.
His first foray into winemaking, Robustus, was an important wine in the history of Douro reds, simply because it was Dirk’s first. Robustus 1990 was an experiment made with grapes from Quinta do Carril, an old vineyard planted in 1925.
Carril has a mixture of many varieties, predominantly Touriga Franca, Tinta Roriz and Tinta Amarela, and is now the source of Batuta, another great Niepoort's table wine.
Dirk Niepoort is one of the best winemakers in Portugal, is synonymous of dynamism, experimentation and above all a great spirit of sacrifice for the wine, which is no more than his greatest passion.
'Over the years I had come to the conclusion that south-facing vineyards were best for Port, but for making great red wine you need more even ripening ' says Dirk. 'For making great red wine you need more even ripening. In north-facing vineyards you don’t have direct sun so you don’t have burnt characters or heaviness'.  He adds that because of more even ripening, in the Douro with its hot summers north-facing vineyards often result in wines with more alcohol because in the south-facing spots maturity is stopped at the hottest times.
The potential of the Douro wine region immediately convinced Dirk. ‘This is a wine region with 2000 years of tradition, but 1950 years of bad winemaking,’ he says. ‘For the last 200 years the wine side has been mistreated because Port has been the focus. From 1990–2000 wines developed quite slowly, but from 2001 onwards there has been a dramatic change: we are living through a revolution.’
Redoma style show the wildness of the Douro, according to Dirk. Redoma was the first commercial revolution of Niepoort's table wines following this one several others came successfuly, Batuta, Charme, Redoma Rosé and White, Vertente, Tiara among others.

White port is a polarizing style of port produced by every major house on the Douro river. The style, often derided by traditionalists, has become increasingly popular as a chilled aperitif and mixing agent in cocktails. Typically inexpensive, white port is almost universally produced to a medium (or higher) sweetness level. Higher residual sugar levels are responsible for the sweetness and alcohol levels tend to be 2–3% lower than red-port styles. Common White Port can be lengthened with tonic (one-third port to two-thirds tonic) before dinner. It keeps for three weeks. Serve chilled to 8-10C with ice, lemon and mint, and pair with toasted almonds, olives or Iberico Ham and Painho from Alentejo Black Pork.

Quinta do Vesuvio Vintage 2015 Port Wine 0,75l Port
An exceptional viticultural year is coming to a close in the Douro with...
€110.50